MIKHAIL SOKOLOV
Law practice since 1995
Mikhail Sokolov specialises in Russia related contentious and non-contentious aspects of corporate and commercial law. This includes company sale & acquisition and joint venture matters, having a complex structure and/or involving more than one jurisdiction. Mikhail also advises on international distribution, sale-purchase of goods and other contractual issues.
Mikhail‘s background is unique and includes experience gained in Russia, United Kingdom and internationally. Mikhail graduated from a university in Russia and had practised Russian law extensively for many years prior to his employment in international law firms in Moscow and in London. As a result, Mikhail has true ‘insider’ knowledge of both markets, which is hugely valuable to his clients. Mikhail also has a strong track record of advising on China-related transactions.

Significant cases and transactions include:
• Advised a Russian distributor company on the joint venture arrangements with a Chinese manufacturer of construction machines.

• Advised a major Russian spa resort provider in respect of its potential insolvency.

• Advised an English company on an acquisition of the Russian company.

• Advised a Chinese company on an acquisition of a group of Russian timber companies.

• Advised a major German company on a sale of its shares in a Russian industrial company.

• Advised a major German industrial company on an acquisition of a Russian company operating in the area of extraction and processing of quartz sand.

• Advised on the restructuring of the company’s electricity – generating assets.

• Advised a Russian company on an acquisition of a group of companies incorporated in Russia engaged in oil production and refining.

• Successfully represented large German company (a producer of construction materials) in a number of corporate disputes with a Russian company.

• Successfully represented a European company in a number of interrelated court hearings concerning ownership of a hotel situated in Moscow.

• Successfully represented a company which was a shareholder of another company in the commercial court. A new court precedent was created as a result of this case: it was held that a general director (CEO) of a company does not have the power to decide solely on participation of the company in any other company – such a decision must be made by the board of directors.

• Successfully represented a shareholder company (an automobile distributor in Russia) in the state court in a shareholder dispute concerning the control over this distributing company.

Significant cases and transactions include:

• Advised a Russian distributor company in relation to an international contract (concerning distribution of construction machines and spare parts in Russia) and various distribution matters.

• Advised on IP law matters, drafting authorship and other contracts ensuring that the company possess copyright to its innovative product (i.e. a complex digital product designed for use in vocational education).

• Advised an English company, a manufacture of clothing for sports, beauty and recovery, on an international distribution agreement with a Russian company.

• Advised a Russian company on supply of spare parts for road-building machines from China to Russia.

• Advised a Russian company (controlled by a foreign shareholder) on a service contract concerning complex drilling operations on the sea shelf.

• Advised a major Russian nuclear company on the issue of determination of law applicable to the construction contract it had entered into with a Chinese company.

• Advised a Ural Plant Loader, a Russian distributor company, on the settlement of a dispute relating to a distribution contract with a Chinese manufacturer.

• Advised an Indian company on the issues of subrogation (insurance law).

• Successfully conducted negotiations on behalf of a Chinese company with its Russian counterparty on repayment of a debt owed by the latter to the former (the debt has been repaid).

• Successfully conducted negotiations on behalf of large Russian automobile manufacturer with a major German company — a producer and supplier of engines (the parties concluded a settlement agreement).

Significant cases and transactions include:

• Represented a director general of the Russian subsidiary company of a large international industrial company in the matter of termination of his employment. As a result, the employment was terminated by the parties’ agreement and the director received a generous compensation from the company.

• Acted in proceedings (in the High Court) on behalf of a leading Russian company against a Russian oligarch and his business associates, in a claim for deceit, conspiracy and fraud.

• Acted in High Court proceedings seeking to enforce a number of Russian judgments in England against the above-mentioned Russian oligarch.

• Represented a Belarusian individual who was a defendant in proceedings before the High Court. The dispute concerned beneficial ownership of shares in a company incorporated in England.

• Advised a major Russian automobile company on employment of a foreign individual as a marketing and development director.

• “The advocates’ monopoly or uniting law professionals into the single body?” https://zakon.ru/blog/2016/07/31/advokatskaya_monopoliya_ili_obedinenie_professii#comments (July 2016)

• “On mediation in Russia and abroad” (February 2006) Corporate lawyer

• “Dividing the company’s assets on its liquidation: some issues of protection of rights of its shareholders” (November 2005) Mergers & Acquisitions

April 2011 – Conference organised by Business and Society journal (Moscow): Can the public placement of information by companies about their corporate social responsibility be qualified as advertising activity?

November 2006 — Mergers & Acquisition Forum (Saint-Petersburg): Recognition of the doctrine of corporate warranties and representations by the Russian statutory and case law.

November 2004 — Corporate Governance Conference, organised and held by the Russian Academy of Business and Entrepreneurship: Disclosure of information by Russian joint stock companies.

Mikhail Sokolov is an advocate at the Moscow Regional Bar of Advocates.

He is a foreign member at the Chancery Bar Association (London). 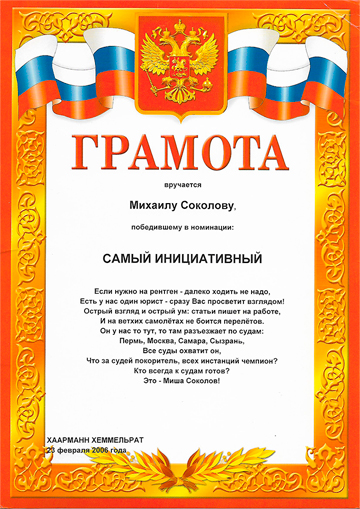 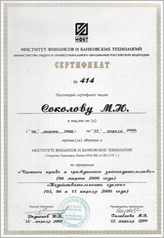 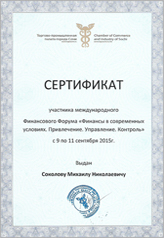 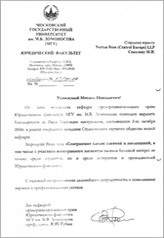 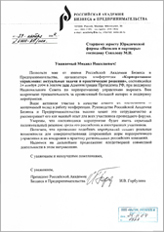 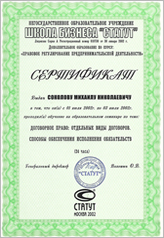 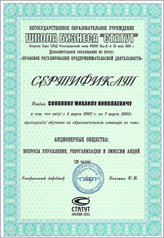 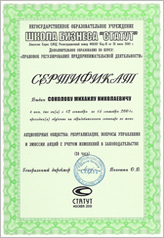 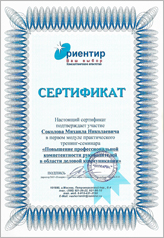 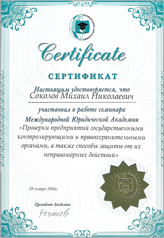 About Mikhail News Offering Publications Contact details
© Мikhail Sokolov 2018. All rights are reserved.
Terms and Conditions
Sokolov Legal is not a law practice regulated by the Solicitors Regulation Authority. In Russia, Sokolov Legal is an advocate’s cabinet, regulated in accordance with the RF laws on advocate’s activity and advocates.
Subscribe to update